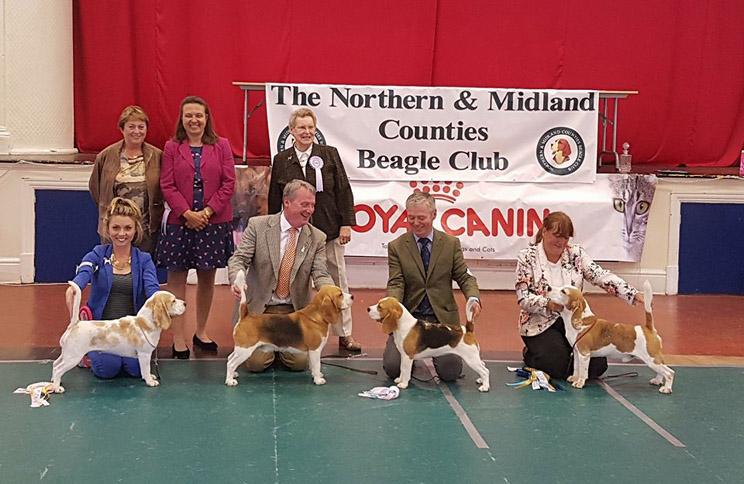 Firstly I wish to convey my sincere thanks to the Officers and Committee of the Club on the kind invitation to judge what was a lovely entry of quality bitches alongside Miss (Barvae) judging dogs on the day.  Overall I found the bitches to be strong in the main with just a few observations regarding incorrect front movement.  Attention to nails would also be advantageous to further improve the presentation of feet for some exhibits.  Quality classes and in particular with the  youngsters with some promising hounds in future no doubt.  Many thanks to all fellow beaglers for bringing your hounds under me today and again thanks to the Club for an enjoyable day.

2nd        Findlay’s Rhiconich Natalie;  Broken tri pup of larger mould than 1. Feminine head with a pleasing dark eye.  Good length of neck into correct shoulders, straight front, correct tight feet.  Level top line held, moved well despite making it difficult for her handler to get the best out of her today but overall a lovely feminine hound.

1st         Jones and Jepson’s Eardley Izzy Cumming. The one that well and truly caught my eye today.  Ultra-smart tri who had everything other than maturity as is expected of one of so young yet easily challenged others for her top awards today.  Beautiful head with a real melting expression, dark eye and excellent ear set.  Good length of neck from well laid back shoulders, round bone to tight and well-padded feet.  Good depth of chest, moderately coupled and a spot on top line to correct tail set. Front and rear construction excels providing the ability to move with reach and drive  aided by her excellent turn of stifle. Still raw as one would wish for her age but caught my eye as soon as she entered the ring and did not disappoint. Easily BPB, RBCC and BPIS.

2nd        Craig’s Davricard Honeybee.  Another promising puppy of larger mould to one but with good quality throughout.  Very feminine head, correct ear set with long leathers, good length of neck into a well laid shoulder.  Moved freely using strong fore and rear, longer coupled than one but overall a well-balanced puppy who was true moving without exaggeration.

1st         Dawson’s Rundle Going for Gold.  Feminine TW bitch with soft melting expression and dark eye, ear set correct.  Reasonable length of neck and level top line; acceptable bone down to correct feet.  Longer coupled bitch with good turn of stifle and much rear angulation.  Moved true and very well handled with her handler getting the best from her in the ring to take the class.

2nd        Webster’s Moonjoon Lilly Of The Valleys for Houndcoast - Pretty and very merry TW bitch in peak condition. Soft expression, acceptable ear set with nice length of neck.  Deep forechest with good spring of ribs, short coupled.  Compact and balanced and moving out free, at one with her handler.

2nd        Craig’s Davricard Musetta -  Open tri bitch of lovely shape, compact and very balanced.  Feminine head with round dark eye, good stop and ear set spot on.  Good length of neck, deep forechest.  Nice out and back on the move using her turn of stifle well and true moving, strongly challenging 1 for the class.

1st         Peak’s Ch Bayard Forget Me Knot JW – By far the strongest class of the day, hard to separate out the lovely exhibits but shining greatest this super TW bitch now rising three.  Super head construction, softest appealing expression with excellent ear set, correct stop and dark pigmentation.  Lovely head construction into good length of neck, well laid shoulders into deep forechest.  Strong bone, round and right down to tight and well-padded feet.  Good spring of ribs, top line level into correct tail set.  It is on the move she excels with good reach and drive using straight front, good turn of stifle and firm hocks to do so.  A true hound in every sense and worth of BCC and BIS as agreed by both judges without hesitation.

2nd Spavins Dialynne Just Ella – Another stunning balanced TW bitch with much to like.  Feminine head with good dark eye, correct stop and spot on ear set.  Nice neckline down to strong straight front and level top line.  In good condition overall well covered and strong quarters.  Deep chest with good spring of rib. Round bone down to tight feet.  Good turn of stifle used well.  Preferred the overall movement of 1 in this class today but nicely presented smart compact bitch and sure to have a bright future. 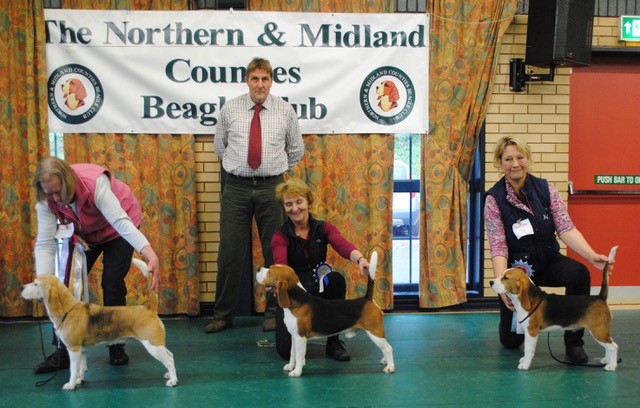 Thank you to my fellow committee members for asking me to judge this friendly show. More quality bitches than dogs with quality especially in the veterans.

Open Dog 1 (0 abs) 1. Lewis’ Fallowfield Gigalo, jusdged this dog before and gave him a 1st, very smart blanket tri, super neck and shoulders, feet and bone, shows himself well. Please to award him BD and RBIS.

1.  Lewis’ Fallowfield Grace, a bitch I have judged before and given first, tan and white with a head to die for, excellent neck and shoulder placement, moves with drive and purpose.  2. Parker and Stevens’ IR CH Serenaker Daydream, compact tri bitch with excellent bone and feet, preferred head of 1.

1.  Cottrell’s Eardley Merry Magdalane, 8 ½ years old, absolutely loved this bitch, showed her socks off, movement spot on, super outline, this is a Beagle and should be a champion. Delighted to award her BB, BVIS and BIS.  2.  Henningson and Dundas’ CH Julemark Hussy, 12 ½ years old tan and white, best front of the day, smaller mould than 1, moved a dream.

VHC - Merrilyn Get Off My Cloud

1st - Summerlily Made in Oz

2nd - Merrilyn Get Off My Cloud